Blog - Latest News
You are here: Home / The Holy Quran / Translation and Interpretation / Which verse in the Holy Quran is a confirmation of tawassul? 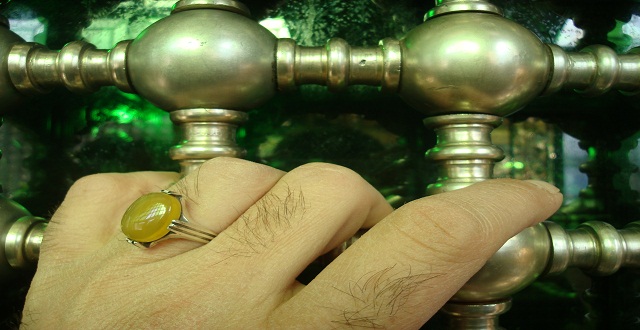 The practice of tawassul from other than Allah (swt), and in other words, seeking aid and help from other than Allah (swt), such as the prophets and His apostles, which has been common amongst Muslims in all ages, in no way means that one believes they are partners with Allah (swt) in His actions. What is truly meant is that Allah (swt) grants our needs through and by virtue of them. In reality what the person practicing tawassul is doing is that he is actually calling Allah (swt) and asking Him, while asking those near Him (who are to be the intercessors) to ask Allah (swt) that their requests be granted.
To answer this question we must first shed some light on the literal and technical meaning of tawassul. Literally tawassul means anything to which a person resorts to attain his objective on his own accord and desire.[1] And some have said that tawassul means “interceding” on the Day of Judgment.[2]
Tawassul in its technical sense means turning to prophets, imams and the pious servants of God for help.
Belief in tawassul originates in the Holy Quran and prophetic tradition. The Holy Quran says, “O you who believe! Fear Allah and seek means of nearness to Him and strive hard in His way that you may be successful”.[3]
There are different examples of implorations and invocations some of which are mentioned as under:
1. Josef’s brothers requested their father (Jacob) to seek divine forgiveness for them and their father fulfilled their request: They said: O our father! ask forgiveness of our faults for us, surely we were sinners. He said: I will ask for you forgiveness from my Lord; surely He is the Forgiving, the Merciful.[4]
As you see, Jacob did not turn down his request nor did he tell them as to why they did not pray to God directly; rather he approved their invocation and promised to ask God to forgive them.
2. Tawassul to the Prophet (pbuh): And had they, when they were unjust to themselves, come to you and asked forgiveness of Allah and the Messenger had (also) asked forgiveness for them, they would have found Allah Oft-returning (to mercy), Merciful.[5]
This verse denotes that in order for a person to be forgiven, he should find an honored mediator so that God may forgive him for his sake.
3. Uthman bin Hanif says: A blind person came over to the Prophet (pbuh) and said, “Pray to God to cure my illness.”
The Holy Prophet said, “If you wait, it would be better. And if you want me to ask God to cure you, then I will do so.”
“Ask God to cure me,” said the man.
The Holy Prophet (pbuh) ordered him to make wudhu and pray to God to recite the following dua (supplication):
«اللهم إنی أسألک و أتوجّه الیک بنبیّک محمّد، نبّی الرحمة، یا محمّد انّنی توجّهت بک

إلی ربّی فی حاجتی لیقضیها لی، اللهم شفعه»
“O’ Allah, I ask you for the sake of Your Messenger, the Messenger of mercy and forgiveness, oh Mohammad I am turning to you in the presence of God to fulfill my wish and O’ God, make Mohammad my intercessor.”[6]
The above hadith implies the permissibility of seeking tawassul because the Messenger of Allah (pbuh) not only did not forbid him from seeking tawassul but he also showed him the right way of doing so. In fact, he taught him how to seek the Prophet’s mediation between himself and God. This is the meaning of seeking tawassul to God’s pious servants.

4. Anas bin Malik says: A man went to the Messenger of Allah and said, “O’ Messenger of Allah, our cattle are dying on account of drought. Pray to God to send down rain.” The Holy Prophet (pbuh) prayed and it rained for a whole week until a man came over to the Prophet (pbuh) and said, “O Messenger of Allah, the houses have been destroyed and the ways have been cut off and …” The Prophet said, “O Lord, send down Your blessing (rain) on mountains, hills, into the valleys, rivers and places where trees grow.” Thereafter, it stopped raining in the city of Medina but it continued to rain in the outskirts.[7]
5. It has been narrated that when Adam committed an error, he appealed to Almighty God by saying: “O’ Lord, forgive me for Mohammad’s sake.”
God said, “O Adam, how did you know Muhammad while I have not created him as of now?”
Adam said, “When you created me, I looked at Arsh (empyrean) on which it was written, “La ilaha illallah Muhammadun rasulullah.” When I saw his name close to Your name, I came to know that he is the most beloved of all the creatures to You.”
God said, “Since you sought Muhammad as a mediator, I forgive you.”[8]
6. It has been mentioned in another tradition which Suyuti has narrated from the Holy Prophet (pbuh) through Ibn Abbas: Ibn Abbas says: “I asked the Messenger of God about the words which Adam (a.s.) received from his Lord and which caused Adam to be forgiven. The Prophet (pbuh) said: Adam asked the Lord to accept his repentance for the sake of Muhammad, Ali, Fatima, Hasan and Hussein, and God accepted his repentance.”[9]
7. Abu Hurairah narrates from the Holy Prophet (pbuh) as such: “…O’ Adam, these (the Ahlulbayt) are My chosen people… whenever you have a wish, turn to them and seek them as means. The Holy Prophet said: “We (the Ahlulbayt) are the ark of salvation. Whoever goes on board the ark, he is saved and whoever stays out will drown and perish. Therefore, whoever has a wish should seek our mediation.[10]

Which one is beneficial?
Scroll to top