Blog - Latest News
You are here: Home / Cultural and Social / Events and Occasions / To Know Imam Ali Ibn Al-Husayn (Peace be on him) Better 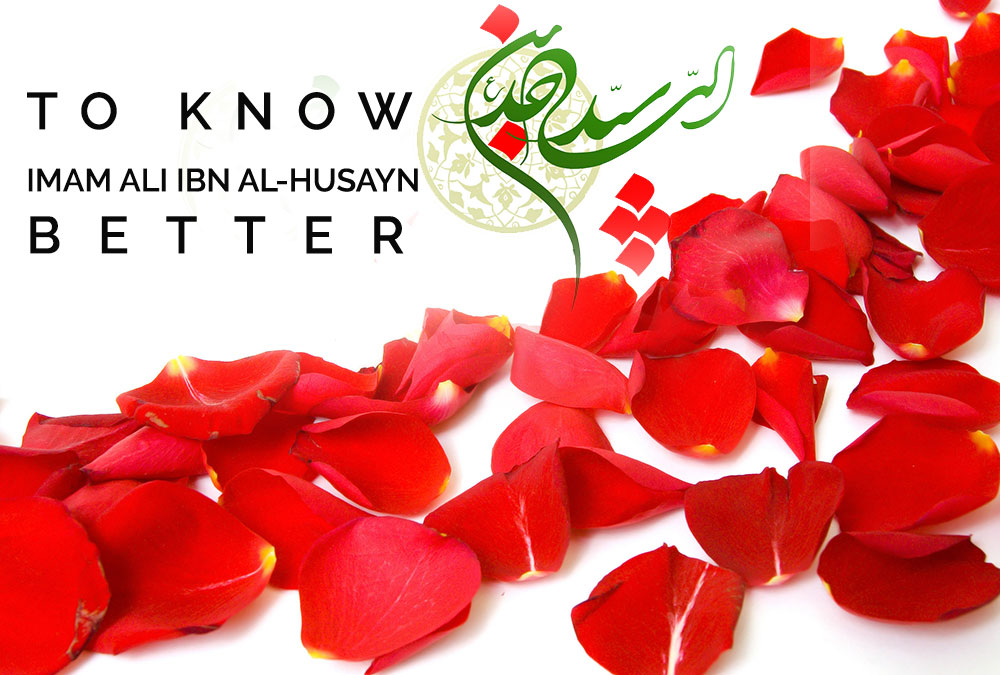 The Holy Imam `Ali Zaynu’1-Abidin is the Fourth Apostolic Imam. His epithet was Abu Muhammad and was popularly titled as “Zaynu’1-Abidin”. The mother of this Holy Imam was the royal personage, Shahr Banu, the daughter of King Yazdeger, the last pre-Islamic Ruler of Persia.

Imam Zaynu’1-`Abidin spent the first two years of his infancy in the lap of his grandfather `Ali ibn Abi Talib and then for twelve years he had the gracious patronage of his uncle, the second Holy Imam al-Hasan ibn `Ali. In 61 AH, he was present in Karbala’, at the time of the gruesome tragedy of the wholesale massacre of his father, his uncles, his brothers, his cousins and all the godly comrades of his father; and suffered a heartless captivity and imprisonment at the hands of the devilish forces of Yazid.

When Imam Husayn had come for the last time to his camp to bid goodbye to his family, `Ali Zaynu’l-`Abidin was lying semi- conscious in his sickbed and hence he escaped the massacre in Karbala’. Imam Husayn could only manage a very brief talk with the inmates of his camp and departed nominating his sick son as Imam.

The Holy Imam Zaynu’l-’Abidin lived for about thirty-four years after his father and all his life he passed in prayers and supplication to Allah and in remembrance of his martyred father. It is for his ever being in prayers to A11ah, mostly lying in prayerful prostration, that this Holy Imam was popularly called “Sajjad”.

The knowledge and piety of this Holy Imam was matchless. az-Zuhri, al-Waqidi and Ibn `Uyaynah say that they could not find any one equal to him in piety and godliness. He was so mindful of Allah that whenever he sat for ablution for prayers, the complexion of his face would change and when he stood at prayer his body was seen trembling. When asked why this was, he replied, “Know ye not before whom I stand in prayer, and with whom I hold discourse?”

Even on the gruesome day of Ashura when Yazid’s forces had massacred his father, his kith and kin and his comrades and had set fire to the camp, this Holy Imam was engrossed in his supplications to the Lord.

When the brutal forces of Yazid’s army had taken the ladies and children as captives, carrying them seated on the bare back of the camels, tied in ropes; this Holy Imam, though sick, was put in heavy chains with iron rings round his neck and his ankles, and was made to walk barefooted on the thorny plains from Karbala’ to Kufah and to Damascus; and even then this godly soul never was unmindful of his prayers to the Lord and was always thankful and supplicated to Him.

His charity was unassuming and hidden. After his passing away, the people said that hidden charity ended with the departure of this Holy Imam. Like his grandfather Ali ibn Abi Talib, Ali Zaynu’l-’Abidin used to carry on his own back at night bags of flour and bread for the poor and needy families in Medina and he so maintained hundred of poor families in the city.

The Holy Imam was not only hospitable even to his enemies but also used to continually exhort them to the right path.

Imam Zaynu’l-`Abidin along with the Ahlu’l-bayt passed through dreadful and very dangerous times, for the aggressions and atrocities of the tyrant rulers of the age had reached a climax. There was plunder, pillage, and murder everywhere. The teachings of Islam were observed more in their breach. The heartless tyrant al-Hajjaj ibn Yusuf ath-Thagafi was threatening everyone who professed allegiance or devotion to the Ahlu’l-bayt; and those caught were mercilessly put to death. The movement of the Holy Imam was strictly restricted and his meeting with any person was totally banned. Spies were employed to trace out the adherents of the Ahlu’1-bayt. Practically every house was searched and every family scrutinized.

Imam Zaynu’l-’Abidin was not given the time to offer his prayers peacefully, nor could he deliver any sermons. This God’s Vicegerent on earth therefore, adopted a third course which proved to be very beneficial to his followers. This was in compiling supplication prayers for the daily use of man in his endeavour to approach the Almighty Lord.

The invaluable collection of his edited prayers are known as as-Sahifah al-Kamilah or as-Sahifah as-Sajjaddiyyah; it is known also as az-Zabur (Psalm) of Aal Muhammad. The collection is an invaluable treasury of wonderfully effective supplications to the Lord in inimitably beautiful language. Only those who have ever come across those supplications would know the excellence and the beneficial effect of these prayers. Through these prayers the Imam gave all the necessary guidance to the faithful during his seclusion.

On the 25th of Muharram 95 AH when he was in Medina, al-Walid ibn Abdil-Malik ibn Marwan, the then ruler got this Holy Imam martyred by poison. The funeral prayers for this Holy Imam were conducted by his son the Fifth Imam, Muhammad al-Baqir and his body was laid to rest in the cemetery of Jannatu ‘1-Bagi ‘ in Medina.

al-Imam `Ali ibn al-Husayn, peace be on him, said:

* Refrain from lying in all things, big or small, in seriousness or in jest. For when one starts lying in petty matters, soon he will have the audacity to lie in important matters (also).

* A man need not fear Allah except on account of his own sins, and should place his hopes only with his Lord. When about something one does not know, one should not be ashamed of having to learn about it. And patience is to faith what the head is to the body; one who does not have patience also lacks faith.

I want to know what I should do to begin the process for marriage?
Scroll to top