Blog - Latest News
You are here: Home / News / Cultural / Thousands of Shia Muslims march in Dearborn in Muharram for faith and ... 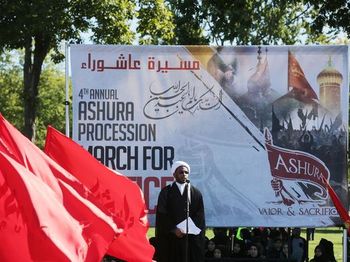 Pumping their clenched fists, the crowd in a Dearborn park chanted Sunday in support of the grandson of Islam’s prophet, Imam Hussain (PBUT): “Labayka ya Hussain,” they declared in Arabic, which means “We’re with you, oh Hussain.”

The scene inside Ford Woods Park was part of a procession and gathering for Shia Muslims during a holy season known as Ashura, which refers to the 10th day of the first month of the Islamic calendar Muharram. During the first 10 days of a 40-day mourning period taking place now, many Shia Muslims gather to remember the battles of Imam Hussain, who was martyred on Ashura while fighting forces with the tyrant Yazid in the 7th Century in what is now the country of Iraq.

Participants and speakers at the rally said the message resonates today in battles against modern-day tyrants and terrorists. ISIS and other extremist groups were strongly condemned at Sunday’s rally.

“He does not only belong to Muslims. Imam Hussain is for everyone. He’s for humanity.”

Escorted by Dearborn police, thousands marched from Fordson High School along the sidewalk to nearby Ford Woods Park. Some gathered in circles to rhythmically sway their arms and tap their chests while chanting religious tributes called latmiya. Many waved large flags that fluttered, carrying tributes and depictions of Imam Hussain and the battles he led.

Various signs at the rally read: “Muslims Stand Against ISIS”,  “Muslims Against Terror” and “Live Free or Die with Dignity!!.” Other signs criticized racism and police abuse, with one large banner reading “In Solidarity With the Victims of Police Brutality.” And some signs called for the release of Shia leaders held captive in countries and criticized Israel and Saudi Arabia and Bahrain for what they consider oppression.

Mohammed Makki, 23, of Dearborn Heights, who carried a big flag that read “Oh, Hussain” in Arabic, said the gathering is “a stand against oppression.”

“It’s important to remember the message,” Makki said. Imam Hussain “was living in a time when oppression was ruling … a lot of slavery going on, a lot of injustice.”

Kassem Elhawli, 50, of Dearborn, said “we learned lessons from” Imam Hussain. “We stand against any tyrants in the whole world.”

Sunday’s event was the 4th annual one organized by the Ashura Project, a Dearborn-based group that promotes the holy day.  A similar procession in Dearborn by Shias that’s scheduled to be held in about 40 days, on a day they call Arbaeen, to commemorate the end of the mourning period has taken place annually in Dearborn since 2004.

In a statement, organizers for Sunday’s procession said it was “done in the footsteps of Hussain, to publicly express their opposition to oppression in all its forms, regardless of who the perpetrator is…to demand justice and an end to all oppression … lending its voice to the voiceless.”

With ISIS in the news often, Berro and others said they hoped to send a message that Islam is about peace.

“The message of Islam is to spread peace, but some like ISIS and all these terrorists have their own agendas,” Berro said. “They hijack Islam. The Quran says, whoever kills one soul it’s as if he’s killed the entire humanity. That’s how much Islam appreciates the life of a human being. These people do not represent Islam … We’re the true Islam.”

Why do we hold these Majaalis?
Scroll to top