Blog - Latest News
You are here: Home / News / Cultural / There is nothing that resembles Islam 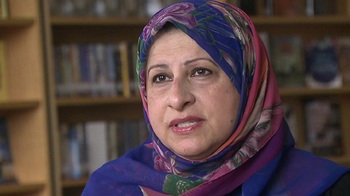 “We still hear people say, ‘Why don’t Muslims condemn this?’ But Muslims are always condemning this,'” said Janan Najeeb, president of the Milwaukee Muslim Women’s Coalition.

Najeeb says besides the ongoing grief over innocent people dying, it saddens the Muslim community that a terrorist group like ISIS claims to be an Islamic organization. “There is nothing that resembles Islam in their actions,” said Najeeb.

Najeeb continues to educate the public about Islam and how terrorists are killing Muslims regularly.

“We also want people to understand that Muslims are suffering the most at the hands of these violent terrorist groups,” said Najeeb.

For instance, just a day before the Paris attacks, more than 40 people were killed in a double suicide bombing in Beirut, Lebanon.

To that point, Najeeb was grateful when Green Bay Packers quarterback Aaron Rodgers denounced a fan’s disparaging remark made toward Muslims during a moment of silence Sunday for the victims of the Paris attacks.