You are here: Home / turkey 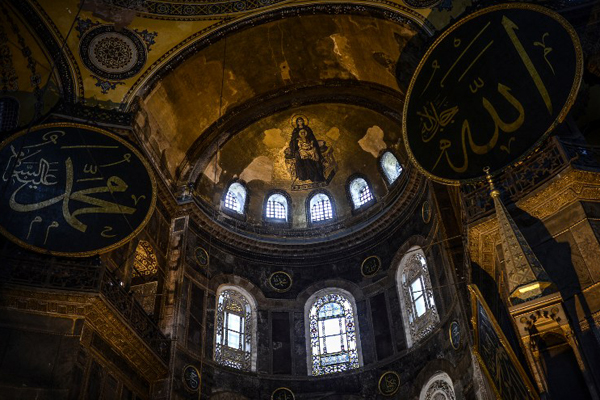 The Hagia Sophia was turned into a museum accessible to all by the secular founders of modern Turkey in the 1930s and secular Turks are wary of any moves to re-Islamise the building.

A passage from the Holy Quran was recited late Friday at a ceremony in the Hagia Sophia to mark the opening of a new exhibition “Love of the Prophet (Peace Be Upon Him).”

It was read by Ali Tel, imam at the Ahmet Hamdi Akseki Mosque in Ankara, the official Anatolia news agency said.

The ceremony was attended by top Turkish officials including the head of the country’s religious affairs agency Diyanet, Mehmet Gormez.

Anatolia said it was the first recitation of the holy Holy Quran in the Hagia Sophia for 85 years. 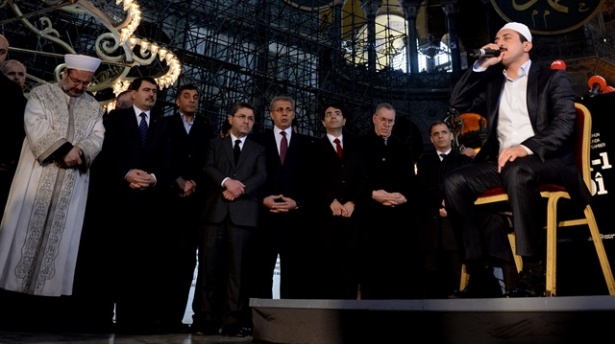 The exhibition inside the Hagia Sophia is a show of calligraphic work in devotion to the Muslim Prophet Mohammed (Peace Be Upon Him) and runs until May 8.

The magnificent edifice was constructed in the sixth century as a church in the Christian Byzantine Empire and was the seat of the Patriarchate of Constantinople, the former name of Istanbul.

When Ottoman forces under Mehmet II conquered the city in 1453 he ordered the immediate conversion of the Hagia Sophia into a mosque. Islamic minarets were built around its Byzantine dome.

It served as a mosque until after the collapse of the Ottoman Empire when in the mid-1930s the authorities of the new Turkish state under secular leader Mustafa Kemal Ataturk ordered it to become a museum for all.

But under the rule of the Islamic-rooted Justice and Development Party (AKP), co-founded by President Recep Tayyip Erdogan which came to power in 2002, there have been noises about reconverting the Hagia Sophia into a mosque.

Turkish Deputy Prime Minister Bulent Arinc caused a furore in November 2013 when he indicated that he hoped to change the status of the Hagia Sophia, saying it looked “sad” but hopefully would be “smiling again soon”.

Greece reacted furiously at the time, saying such statements “are offending the religious feeling of millions of Christians.”