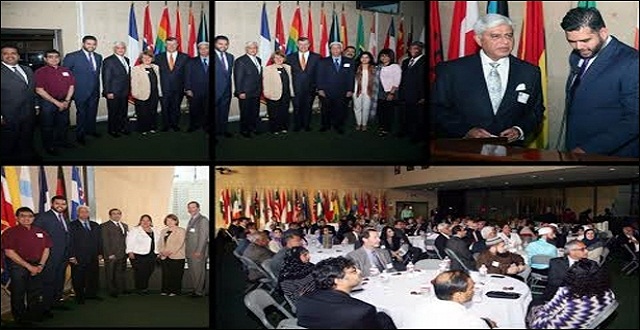 This was the first from any Dallas Mayor. The dinner which was sponsored by renowned city businessman Amir Rupani, Arman Rupani and Mohsin Mandavia and others.

A large number of religious leadership of Shia, Sunni and Ismaili community were in attendance.

Talking to the group Dallas Mayor Mike Rawling said that around 150,000 Muslim live in Dallas Metroplex from which around 40,000 live in Dallas County.

He said that this is the first time an Iftar at City Hall is held to celebrate the social and religious event together.

He said that this is their wish that this dinner is hosted every year and until he is Mayor he will host this event each year.

He said that Dallas is one of the largest city of the nation which is growing at a very fast pace.

He said that the immigrant population has a large contribution in Dallas city progress and this is why we need to work together for the economic growth of the city.

He thanked to the young Muslim leader Arman for giving him the the advice for hosting the dinner. He said that together we should prepare for the challenges of 21st century and to leave the city and the country in better shape for our coming generation.

Special arrangements for Azaan and prayers were also made during the event. The Muslim and other Americans socialized at this event. Muslim community leaders thanked Mayor Mike Rawlings for his hospitality.