Blog - Latest News
You are here: Home / News / Cultural / Obama is a “Shiite Muslim” and his name reflects something 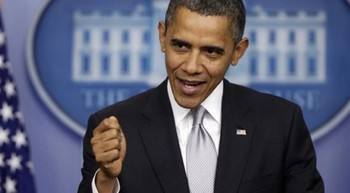 [dropcap]A[/dropcap]n opinion column written by a Bahraini journalist about the US president Barack Obama turned into an opportunity to launch sarcastic comments and jokes on social media platforms.

Hisham Al-Zayani, a regular columnist in Al-Watan newspaper funded by the Bahraini Royal Court, wrote an article on Monday (April 6, 2015) in which he described Obama as a Shiite, referring to one of the Islamic sects.

His claims were based on a number of comments made by the Syrian opposition member, Mohyeldeen Al- Lazikani, during a televised interview with Al-Jazeera, as he said: “US President Barack Obama descends from a Kenyan Shiite family” and was born to “a Shiite father” “in Mombasa village whose residents are Shia.”

“It is not unlikely that his claims are true considering president Barack Hussein Obama’s decisions, and even his name reflects some of what Al-Lazikani said,” stated Al-Zayani, who quoted all the remarks made by Al-Lazikani in his article.

“To the leaders of the Gulf…Do you tell that to Obama?” he added, also clarifying his point: “I remembered just after Al-Lazikani’s interview that president Obama is the only US president who has mentioned Al-Wefaq is his addresses, which is a Shiite Bahraini group that became well-known because of its sectarian conduct and it also follows the concept of Wilayat al-Faqih.” according to him.

Tweeters and Bahraini activists seized this opportunity to launch a series of jokes.

The Bahraini sociologist, Lund University professor, Abdulhadi Khalaf, tweeted: “The unknown has been unveiled: US President Obama is a Shiite from a Kenyan village that embraced Shi’ism at the hands of the Ibadis.”
In another sarcastic tweet he posted on his Twitter account with an edited picture showing Obama holding a

loudspeaker amongst crowds, Khalaf said: “A young Obama leading a Husseini funeral procession in Mombasa,” signifying the mourning funeral processions that Shiites hold to express their grief over their Imams.
As for Jassim Morad, he posted: “The Arab spring is starting to bloom some geniuses. Hisham Al-Zayani endorses Al-Lazikani’s statement, who was the first one to discover that Obama is a Shiite and even says that his name signifies this (Barack Hussein Obama).”

Meanwhile, the tweeter “Shahid” posted: “There is no use anymore…Hisham Al-Zayani revealed the secret and found out that Obama is a Shiite.”

“Patriot”; however, tweeted: “This is utter stupidity! Hisham Al-Zayani’s Hallucinations: Obama has Shiite origins!”
Bahraini tweeters made fun of Al-Zayani’s article by posting sarcastic remarks and jokes, yet Al-Zayani himself was completely serious about his claim. He even used it as a threat too.

“Tell Obama that America’s conspiracies against Saudi Arabia and Gulf States are clear now and everyone knows about them,” he added. “We tell (Obama): Don’t you dare harm Saudi Arabia just one bit, for Saudi Arabia’s leader has the strongest and most dangerous weapon that could terrorize you, the Iranians and the Zionists, and that is the weapon of (declaring Jihad and Mobilization).”

“If that happened, all nations from Canada in the West to Indonesia in the East will march towards you. This is what you fear most.”

Al-Zayani is not joking. Believe him or await the “Declaration of Jihad and Mobilization” to be printed on the pages of the Al-Watan newspaper, the voice of those who have no voice in the Bahraini Royal Court!