Blog - Latest News
You are here: Home / News / Cultural / Michigan Muslim man in a trip to enlighten on true image of Islam in 50... 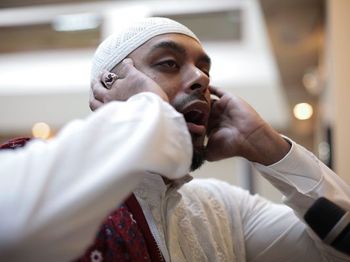 [dropcap]O[/dropcap]n a spiritually motivated journey, an American Muslim from Michigan is to visit 50 mosques in 50 states to perform the Adhan (call for prayer) with a special call to the nation’s Muslim community, amid soaring Islamophobia, according to media reports.

Jameel Syed is aiming to become the first person to perform the Adhan in all 50 U.S. states, using his voice across America to help educate the public about Islam, praise its Prophet (peace be upon him), and also honor the memory of his father.

The 35-day road trip will include occasional flights to reach states like Hawaii, and will end May 8 at the Rochester Hills mosque.

“Islamophobia is real, there is no question about it,” Syed told as he traveled from Mississippi to Florida.

“It’s one thing people in our community are really aware of. And the big message here is we have to go out there and meet and interact with people.

“Give them the opportunity to let them know who you are. That’s your best shot to dispel any myths, to breakdown any stereotypes, and to make a real dent into discrimination.”

After reciting the call to prayer at each mosque in 50 states, Syed will deliver the last sermon given by Prophet Muhammad (PBUH), a talk that Syed said promoted gender equity, racial equality, trust, and peace.

According to the 40-year-old marketing executive and graduate of the University of Michigan, the initiative aims to showcase the beauty and diversity of Muslim communities across America.