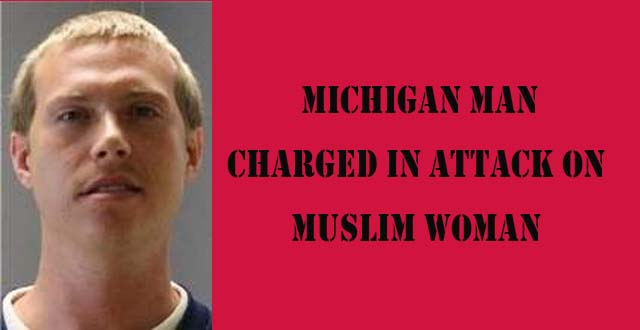 MASON, Mich. – A Mason man was charged with ethnic intimidation and a misdemeanor assault and battery charge in connection with an assault on a Muslim woman at the Meridian Mall on July 19.

Jonathan Patrick Deuel, 29, was arraigned today in 55th District Court in Mason, accused of participating in assault of the woman near the mall’s food court. Deuel was arrested on Wednesday by Meridian Township Police.

The ethnic intimidation charge is a felony punishable by up to two years in prison and up to a $5,000 fine. Assault and battery is generally a misdemeanor punishable by imprisonment of up to 93 days and fines of up to $500.

The Council on Arab-Islamic Relations – a Muslim civil liberties advocacy group – spoke with the woman’s family and said that three people, two men and a woman, had surrounded the 26-year-old at the mall.

They then allegedly tried to pull off her niqab and abaya – the veil and dress that some Muslim women choose to wear in public – before knocking her to the ground and shouting slurs and profanities at her.

“We urge state, local and federal law enforcement authorities to investigate a possible bias motive for this troubling incident and to make every effort to bring the alleged perpetrators to justice,” said Dawud Walid, executive director of CAIR-Michigan, said on July 21. “We urge public officials to speak out against the anti-Muslim hate that can lead to such attacks.”

Meridian Township Police say that Deuel will be the only person charged in the incident, contrary to the claims of multiple assailants made by CAIR. Lt. Greg Frenger said that while there were other people who witnessed the attack, Deuel is the only person to commit a crime.

“I don’t foresee any other charges coming out of this,” Frenger said. “There were other people present but only one person committed a crime.”

The incident was investigated as a hate crime and Frenger said that behavior such as this would not be tolerated in Meridian Township.

“This sort of thing is unusual for this community,” he said. “This is a diverse community and any person living and working in this area should not feel like there’s going to be any hesitation on our part to investigate such a claim.

“This is who we’re made up of,” Frenger added. “We took it seriously when it first came to our attention and followed through. We’re pleased that charges have been issued and he’s been arrested.”

Deuel’s bond was set at $25,000 and his preliminary hearing is scheduled for Aug. 21 in Mason.

Hijab The Dress of Modesty in Islam - eBook

The Status of Women in Islam - eBook

Woman and Her Rights in Islam - eBook