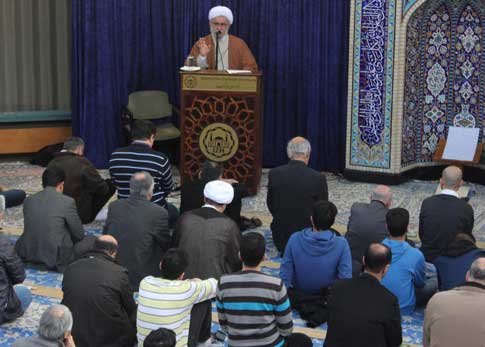 Hujjat al-Islam Ramazani-Gilani, stated that the Universal Declaration of Human Rights has several shortcomings, one of which is due to its lack of proof, as it is a human-made and not a divine document.

The Friday prayers’ leader and the imam of the Islamic Centre of German city of Hamburg, Hujjat al-Islam Dr. Reza Ramazani-Gilani, stated that the Universal Declaration of Human Rights has several shortcomings, one of which is due to its lack of proof, as it is a human-made and not a divine document.

The Universal Declaration of Human Rights (UDHR) is a declaration adopted by the United Nations General Assembly on 10 December 1948. The Declaration consists of thirty articles which have been elaborated in subsequent international treaties, regional human rights instruments, national constitutions, and other laws.

The provisions of this declaration consist of a series of slogans, and the principles, proofs and arguments have stated nowhere, even in the endnotes and attachments related to the declaration.

He said that the Universal Declaration of Human Rights claims to be related to all of mankind, locations and times, but it has been codified due to the prevailing in the society of the time it was formulated. It should also refer to the reasons, sources and principles of these issues as well.

Hamburg’s Friday prayers’ leader said that all human beings, and from the perspective of dignity, all rights are equal and stated that in terms of the philosophical foundations and intellectual arguments in regard to the issues which evoke different and conflicting views should be clarified.

Hujjat al-Islam Ramazani-Gilani added that writing a series of rights without taking the necessary fundamentals and resources into consideration is intellectually unacceptable. Thus, it is necessary for these shortcomings to be seriously considered.

His Eminence said that only if human rights are based on a credible collection of rules and regulations and not created by mankind they can be acceptable. “From the perspective of Islam, human rights cannot be achieved by the rules of interpretation of several people but only through the laws of God,” he said.

He pointed out other shortcomings of the Declaration of Human Rights, adding it does not have any enforcement, but it is a series of legal materials that have been put together without any guarantee.