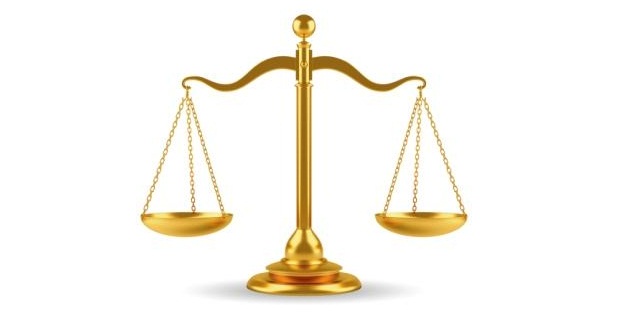 We believe that God is just and that justice is one of the divine attributes of beauty (J). The basis of this belief is the Qur’anic negation of any possibility of any injustice on the part of God, referring to him as being upright in justice. As it is said:

Indeed, Allah does not do injustice, [even] as much as an atom’s weight;[1]

Verily Allah will not deal unjustly with man in aught: It is man that wrongs his own soul.[2]

In addition to the evidence provided by these verses, the intellect can discern the justice of God with utmost clarity. For justice is an attribute of perfection, while injustice is an attribute of imperfection; and the human intellect perceives that God possesses all possible perfections, and that he is exalted beyond any possibility of any imperfection or deficiency, both as regards his essence and his actions.

It is clear that none of these factors can have anything to do with the divine nature, all of Gods actions being just and wise.The following hadith corroborates this; Sheikh Saduq relates that a Jew came to the prophet (S) asking various questions, some of which was related to the question of divine justice. In explaining why God does not commit injustice, the prophet (S) said,

It is because God knows the ugliness of injustice and is not in any need of it.[3]

what does the justice of God mean?

Given the verses cited above, and many others of similar import in the Qur’an, all Muslims are at one over the issue of divine justice; but there is a certain difference of opinion regarding the question of what the justice of God actually means. Muslims have opted for one of the two following positions:

1) The human intellect distinguishes between good and evil actions, understanding the former to indicate the perfection of the agent, and the later the imperfection of the agent. Since God, by nature, possesses all ontological perfections, the intellect discloses that his acts must be perfect and pleasing, his most holy nature being devoid of all kind of evil. Consequently, God deals justly in his relation with mankind.
In Islamic theology this approach goes by the name of ‘the intelligibility of good and evil'(husn wa qubh aqli). The adherents of this approach are referred to as the ‘adliyya'[4], the forerunners of whom were the scholars of the Ahlulbayt school of thought (Shi’a).
1) إِنَّ اللَّـهَ لَا يَظْلِمُ مِثْقَالَ ذَرَّةٍ ۖ وَإِن تَكُ حَسَنَةً يُضَاعِفْهَا وَيُؤْتِ مِن لَّدُنْهُ أَجْرًا عَظِيمًا
[4:40]
2) إِنَّ اللَّـهَ لَا يَظْلِمُ النَّاسَ شَيْئًا وَلَـٰكِنَّ النَّاسَ أَنفُسَهُمْ يَظْلِمُونَ
[10:44]
3) Sheikh Saduq, kitab al-Tawhid, chapter 61. Hadith number 13.
4) the term ‘adlyya’ refers to both the Shi’I and the Mu’tazili schools which stress justice as one of their key theological principles.

What corrupts the Tongue?
Scroll to top