Blog - Latest News
You are here: Home / The Holy Quran / Translation and Interpretation / Can people have contact with Jinns? 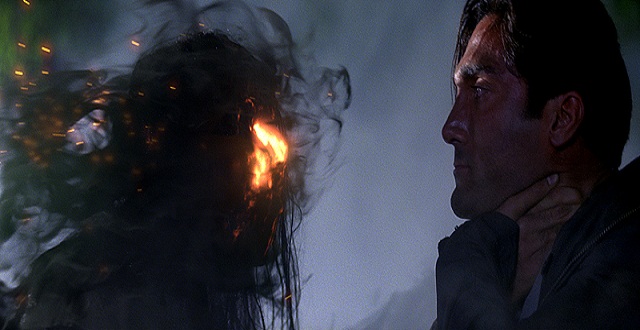 The Holy Quran has confirmed the existence of Jinns and has attributed the following characteristics to them:
1. Jinns are creatures that are made of fire; this is while humans were created from clay.[1]
2. They have knowledge, understanding, they can discern truth from the falsehood and they also have the power of logic and argument.[2]
3. They have religious responsibility and duty.[3]
4. Some of them are pious and righteous and others are Kafirs (unbelievers).[4]
5. The Day of Judgment will apply to them as well and they will be resurrected as well.[5]
6. They originally had the ability to penetrate the heavens and gather news by eavesdropping but this was later blocked from them.[6]
7. They had relationships with humans and because of some limited secret knowledge they possessed, they would mislead and decieve certain humans.[7]
8. Some of them possess a lot of power in comparison to other ones of them, as is the case with humans.[8]
9. They have the power of doing certain things that humans might need.[9]
10. They were created on this earth before humans were created.[10]
11. In the story of Prophet Soloman (A) an Ifrit Jinn claims that he can bring Bilqays’s throne before Prophet Soloman can stand from his spot.[11] Prophet Soloman doesn’t deny this claim of the Jinn, although at the same time, the Quran doesn’t state that the jinn actually carried out this claim.[12]
From these verses in the Holy Quran we understand that Jinns are not imaginary; they are real physical beings with whom contact is definitely possible and certain people have had contact with them. From ancient times there has been a lot of conjecture and stories about contact with Jinns but we can only accept things that are narrarated through verified hadiths about the different relationships one might have with them. Here we’ll go through some of the things narrarated for us through the Holy Quran and the Hadiths, and passed on to us through Islamic scholars:
A. Taking refuge in Jinns; In the Holy Quran it says, “Indeed some persons from the humans would seek the protection of some persons from the jinn, thus only adding to their rebellion”.[13] One of the ancient customs of the Arabs was that whenever they reached a dangerous or frightening part of the desert they would take refuge in the specific Jinns of that area. Islam negated this custom and made specific commands about taking refuge only in the creator of the Jinns and Men, Allah swt. [14]
B. Enslaving Jinns; Enslaving Jinns and getting assistance from them is possible, but its permissibility according to the fuqaha is debatable and controversial. What is certain is that this act can’t be approached by a way that has already been made haram (a sin) in the sharia (Islamic law) (for instance, if one of the conditions for enslaving a jinn is to eat something haram, then one can’t do it; not because enslaving it is haram, but because the means of doing so is haram) nor can it be in a way that bothers or hurts others. Also, getting assistance from them cannot be for things which are haram or sinful; doing something which is haram (sinful) is a sin whether it’s done by another intermediary or done by oneself.[15]
It was asked from Ayatollah Al Udhma Khamenei about the rulings of people who raise spirits or call on Jinns with the very specific intention of only doing good through this method. He replied: This action is halal in itself and there is no problem with it but with the condition that it is done through halal (according to sharia) ways.[16]
For further explanations please see:
1. The power and ability of Shaytan and the Jinns, Question 883.
2. Shaytan, Angel or Jinn? Question 857.
3. Rijali Tehrani, Ali-Reza, Ketabe Jinn va Shaytan, Tahqiqe Qurani, Revayi va Aqli.

Was Prophet Adam the eighth person to live on earth?
Scroll to top