Blog - Latest News
You are here: Home / Lifestyle / Youth / 3 Things Every Muslim Couple Should Know in the Engagement Period 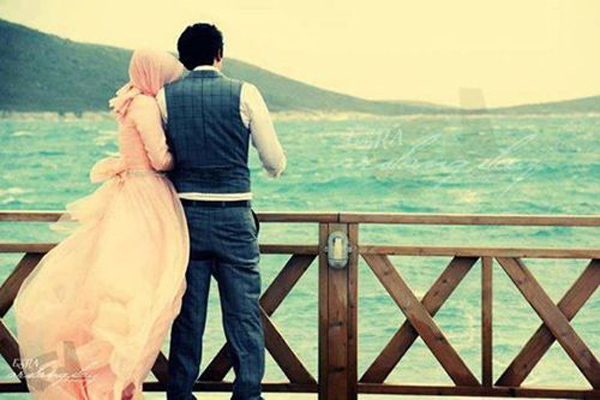 This discussion can actually be divided into two separate and distinct categories:

(1) the look and touch before proposing to the other party;

(2) the look and touch after the proposal has been accepted;

It is well known that a man and woman who are not related to one another through a direct blood relationship or through one of the other ways (that are mentioned in the detailed books of Fiqh) are not Mahram of one another. Thus, they can not touch or look at each other without the proper covering or with a lustful or seductive glance.

Once the temporary or permanent Aqd has been performed, then the man and woman become Mahram to one another through the marriage formula and can talk, be in a secluded place with one another, hold hands, touch, hug, kiss, etc…

However, while the man and woman are talking with one another in order to get to know each other, they are not permitted to be in a secluded place together, nor have any sort of physical contact – these are all forbidden (haram) in Islam.

Once they have agreed to marry one another, the next step, in order for them to be able to talk in private, go out together for dinner or be able to touch each other, is that they must recite either the temporary or permanent Aqd. In most cases, the couple-to-be recite a Mutah, with the knowledge that within a certain time frame, they will be getting married (permanently).

The Mutah too has various conditions that must be followed, of which, we highlight the most important ones:

One of the other incorrect philosophies that a majority of people have adhered to is the Istikhara or seeking the best from Allah (SwT) before a marriage.

Before the boy and girl even get a chance to meet one another and talk and see if they are compatible with the other, the parents will rush to their local Mawlana or Alim to perform the traditional Istikhara. If the answer comes ‘good’, then even if the boy or girl is the biggest sinner or ill-mannered person, the parents will welcome him/her into the family with open arms.

The opposite has also been seen that if the boy or girl is an upright, virtuous, and pious believer, but the Istikhara comes out ‘bad’ then they are automatically rejected with no chance to go forward.

This idea, which is so prevalent amongst the Muslim community, must be uprooted and thrown out with all other such traditional and cultural practices that have no basis in Islam.

The Istikhara is a method that has been taught and approved by our Prophet (S) and Ahlul Bait (as), however, there are many preconditions and steps that nust be followed before we rush to the Quran or Tasbih.

These stages, in relation to marriage include:

If one is truly in doubt after all these stages have been exhausted, then and only then should one resort to the ‘traditional’ Istikhara.

The Mahr – or dowry as it is usually translated – is one of the ways through which the woman becomes halal for the man – the other (which goes along with and is side by side) is the actual Aqd or reading of the vows.

The Mahr, which must be specified before the Aqd, is a gift to the wife and in no way can be referred to as the price or worth of the woman. By examining the Islamic traditions, we see that it is not necessary that money or gold or some physical item be given as the Mahr – rather, anything that the woman requests and the man agrees to would be considered as the Mahr.

It is for this reason that we see at the time of the Prophet (S) that a man married a woman and the Mahr was that he would teach her the Quran! There are many instances such as this in the history of the Muslims where the Mahr was either a very small amount or a non-materialistic gift.

Unfortunately, in many communities nowadays, the trend has been to set the Mahr to substantial amounts of money, jewelry, gold, and other material goods – where as in Islam, the recommended act is to have a ‘small’ or modest Mahr, such that the husband is not put into any difficulty to pay it and thus, a large Mahr is actually Makruh or highly discouraged.

According to the Scholars, if the Mahr is set to such an amount that even in the future, the man will not be able to pay it, or if the man does not have the intention to pay the Mahr, then such a marriage is a matter of doubt.

Also, it must be made clear that the Mahr is not something that one pays only in the event of a divorce, as is seen in some East Asian cultures. Therefore, the wife can even demand that this amount be paid to her before she agrees to have sexual intercourse with her husband.

The husband and wife can agree on a time frame when the amount will be paid and as it has been mentioned in the Islamic books of law, if the wife demands the money after it has become due, then it becomes obligatory on the husband to give it to her even if it means that he must take a loan. If he does not pay the money while possessing the ability, then he has committed a grave sin and will be held accountable by Allah (SwT).

In relation to the Mahr and its importance, Imam Ali ibn Abi Talib (as) has stated:

“This (the Mahr) is the most important of all the conditions through which, the private parts (intercourse) have been made lawful and permitted for you.”

We conclude the section on the importance of the Mahr with a stern warning from our Prophet Muhammad (S) about those men who refuse to give their wives that which they promised them:

What is Imam Ali’s perspective in respect to the Quran?
Scroll to top