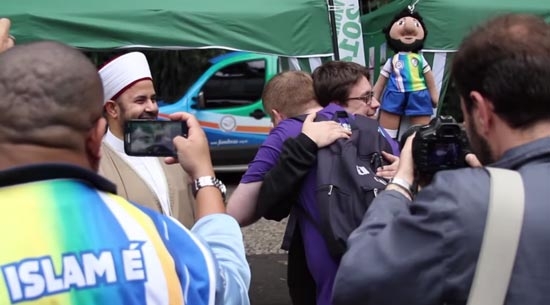 BRASILIA – Answering the call of Islam, 19 football fans attending Brazil World Cup 2014 have reverted to Islam after meeting daw`ah teams spreading across the land of samba over the past month.

The number of reverts to Islam since the start of the World Cup “has increased to reach 19 people of different nationalities after the reversion of English, Spanish and Brazilian fans,” Sheikh Khaled Taky El din, President of the Supreme Council of Imams and Islamic Affairs in Brazil, told the Anadolu Agency.

“Three more football fans, including a British, a Spanish and a Brazilian have taken the declaration of faith (shahada) within the past couple of days after getting introduced to the teachings of Islam by the campaign launched by the Council.

“The three fans knew about Islam from the da`wah stalls following “Know Islam” campaign before expressing with wish to join Islam,” he added.

As the World Cup tournament goes on, a growing number of Brazilians have answered the call to Islam, choosing to accept the message of the world’s fastest growing faith.

Hosted by Brazil for the second time, the FIFA World Cup football tournament have been running from June 12 and will conclude on July 13, 2014.

The launch of the tournament saw the start of several campaigns to introduce Islam to thousands of fans heading from across the world under the leadership of the Federation of Muslim Associations in Brazil (Fambras).

Finalizing their preparations for the huge event, staff at Fambras was preparing their own welcome to about 600,000 fans expected to visit the country during the month-long competition.

Earlier this month, the group announced that a special guide book has been published in Brazil for Muslim fans in the 2014 FIFA World Cup.

Titled “Salam (hello) Barazil”, 65,000 copies of the 32-page booklet have been published by the Union of Islamic Associations of Brazil in cooperation with the Omani embassy in the South American country.

A 12-hour daily phone service — in English, Arabic, Spanish, French and Portuguese — will also launch before the tournament starts.

Along with the three fans who reverted to Islam, the World Cup has seen the reversion of sixteen more fans from different nationalties according to Sheikh Taky El din.

However, the Islamic Brazilian Federation puts the number at around one and a half million.

With no confirmed number of Muslims, the best indicator of the growth of Islam in the country is the rapid increase in the number of mosques.